The California Governor's Office of Emergency Services (Cal OES) manages a statewide fire and rescue program, providing Type 1 pumpers built by HME Inc. on loan to local fire departments for use in their districts, while requiring those departments to staff the vehicles for the state when needed.

Cal OES purchases the vehicles fully equipped, then assigns the pumpers to local governments and fire agencies on temporary-use agreements where the state never relinquishes control of the vehicles. "We continue to maintain the vehicles and twice a year do an onsite inspection of the pumpers to be sure they are maintained according to our standards," says Kim Zagaris, state fire chief for Cal OES. "The agencies agree to staff the vehicles anywhere and anytime that we need them, whether in state or across the nation. We provide reimbursement for their staff members, but there's a clause in the agreement that says they may have to staff the pumper for free."

Mitch Willoughby, national sales and marketing director for HME, says his company recently was awarded a second multiyear contract to supply Cal OES with Type 1 Model 18 pumpers. "Our first contract was for five years, and we produced 269 apparatus," Willoughby says. "We built 49 Type 1 pumpers for Cal OES, 164 Type 3 wildland pumpers for CAL FIRE, and 56 other products through a cooperative purchasing program with the state." Willoughby estimates that about 95 percent of the Cal OES fleet of vehicles was built by HME. 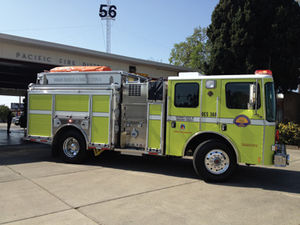 Zagaris says the program has been around since 1950, when it was run under the federal Civil Defense Program. "Back then, we purchased 100 pumpers and matched that value with state money," he points out. "We are the only state in the country still running this program-it is the cornerstone of California's fire and rescue system."

Besides managing the state fire and rescue program, Cal OES also provides urban search and rescue (USAR) resources for local and federal partners, has Type 1 swift water rescue teams, manages a fleet of water tenders (tankers), oversees the fire school program for cities in the state, and serves as the homeland security agency for California's 38 million people. Between 2008 and this year, the agency was known as the California Emergency Services Agency (Cal EMA) but has since reverted back to its original name. 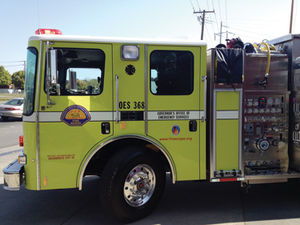 Zagaris points out that Cal OES currently has a large fleet spread out around the state. "We have 114 Type 1 pumpers, 15 Type 3 wildland pumpers, 12 Type 1 water tenders, 13 swift water vehicles, 18 rescue system vehicles, six communications units, and a variety of command and other vehicles," he says. "Our Type 1 pumpers built by HME are designed to handle urban, suburban, rural, and wildland situations."

One of the departments in the state that participates in a temporary-use agreement with Cal OES is the Sacramento (CA) Fire Department, which protects the state's capital city. Scott Williams, Sacramento's assistant chief, has the Cal OES pumper located in South Sacramento where it is in one of the busiest engine companies in the department.

"We have two crosslays, one consisting of 150 feet of 1¾-inch hose and the other consisting of 200 feet," Williams says. "Traditional property lots in the area are 150 feet deep, so we're set up to fight a fire from street to alley. The 200-foot hoseline would get us to the third story of a Victorian-style house."

The HME pumper, which the Sacramento (CA) Fire Department took delivery of in April 2013, also is set up to handle wildland fires, Williams says, with 100 feet of 1¾-inch hose in the front bumper along with a Task Force Tips Apollo HiRiser 1,250-gpm monitor. "We also carry four hose packs of 200 feet of 1½-inch single-jacketed wildland hose," he notes. 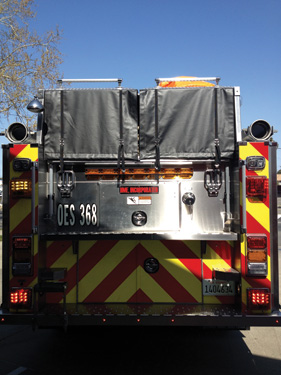 Besides its role as a Type 1 pumper, the HME Model 18 SFO is set up for wildland work-carrying four hose packs of 200 feet of 1Â½-inch single-jacketed wildland hose-and also as a Type 3 urban search and rescue (USAR) rig.

Built to Suit Many Needs

Besides the wildland role, Cal OES specifications call for a USAR function for its pumpers. "In addition to being a Type 1 pumper, it also is set up as a Type 3 USAR rig with light shoring and for rope operations," Williams says. "The vehicle can be put into service as a light rescue in case of an earthquake."

Zagaris points out that although the state doesn't buy a lot of "bells and whistles" to put on its apparatus, it does "build a pumper that meets a lot of needs and carries equipment for all types of situations."

He says that local governments and fire departments piggyback on the state's HME contract regularly. "Although what they buy may not be identical to our specification, they are mostly the same," he notes. "In fact, the National Park Service duplicated our specifications for its Type 1 structural pumper to protect national parks."

Zagaris calls the HME Type 1 pumper "a diversified tool that accomplishes a number of missions well." He continues, "We can't get a better pumper for what we ask it to do, and we get extraordinary value with it. And with its color (bright yellow), we can see it in a crowd and it stands out on the news. We want to build the most modern, cost-effective, and safe vehicle for those who have to operate and use it."

ALAN M. PETRILLO is a Tucson, Arizona-based freelance writer and is a member of the Fire Apparatus & Emergency Equipment editorial advisory board. He served 22 years with the Verdoy (NY) Fire Department, including in the position of chief.