The HME, Inc. the fire service knows today is not the same HME Magnus Hendrickson founded in 1913. Staying in business for 100 years is no easy feat. Ken Lenz, president, who has been with the company for 36 years, attributes the company's perseverance and dedication to both the trucking and fire industry as keys to its success. "Staying ahead of the curve in relation to our ever-changing technology has always allowed HME to maintain an edge on the competition," he says. "Throughout the company's history, HME has opened its doors to other OEMs and provided them with our products to assist them in growing their companies." 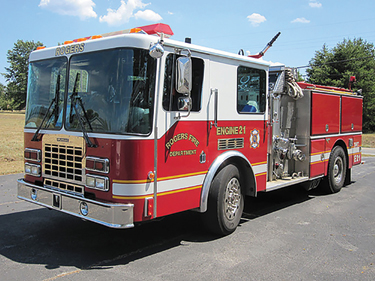 HME began designing and manufacturing a line of fire apparatus chassis for Grumman Emergency Products in 1989. The chassis HME created for Grumman as a variation on its original VT-100. It eventually became known as the Panther I, for aerials, and Panthe

HME traces its roots back to 1913 when Magnus Hendrickson, a designer and manufacturer of custom truck chassis, founded the company as Hendrickson Mobile Truck Company. Hendrickson was one of the first engineers of his day to see the potential for two rear axles, along with the incorporation of suspension systems. In fact, there is still a division of the original company that continues to supply suspensions for trucks and trailers, still bearing the name "Hendrickson."

The first HME design to be released under the new ownership was a custom truck chassis known as the VT-100. The VT-100 was a Class 8 conventional truck chassis engineered to withstand the rigors of severe construction applications.

In the 1950s, HME designed the first tilt-cab over, which tilted to the rear. In 1983 it introduced tilt-cab engineering to the fire service when it designed the first tilt cab for fire apparatus. The company found that using a tilt cab in tandem with cab-forward trucks, which featured shorter overall lengths and improved maneuverability, was very practical for fire apparatus applications. In addition to the practical aspects of driving the apparatus with these features, using the tilt-cab design also provided easier and more efficient access to the engine compartment, ultimately reducing maintenance time and costs. 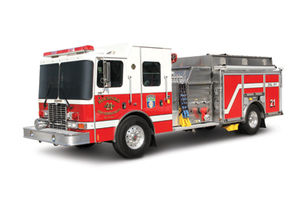 In 1988, HME moved its manufacturing facilities from Chicago, Illinois, to Wyoming, Michigan. In 1989, the company began designing and manufacturing a line of fire apparatus chassis for Grumman Emergency Products, then based in Roanoke, Virginia.

The chassis HME created for Grumman was a variation on its original VT-100. It eventually became known as the Panther I, for aerials, and Panther II, for pumpers. During a three-year period, HME manufactured almost 300 chassis for Grumman until it closed its emergency products division.

After the Grumman experience, HME leadership saw the potential to serve the fire service with its own designs and launched the HME 1871 Series of custom fire truck chassis in 1992. Lenz considers the move from Chicago and launching the 1871 Series two of the most important events for HME. "The relocation of the manufacturing facility to Wyoming, Michigan, was the most significant milestone, and designing the 1871 Series chassis was no doubt the most important product," he says.

With the 1871 chassis, HME entered the fire industry as an independent manufacturer and began to market cabs and chassis to apparatus manufacturers across North America and around the world. The company still builds chassis for several OEMs.

The spring of 2002 saw HME move into engineering and manufacturing a line of complete fire apparatus. That year, HME also acquired the rights to the Ahrens-Fox brand. "It allowed us to combine the rich history of the two companies to create a separate line of apparatus using existing brand recognition," says Lenz. "HME Ahrens-Fox offers another distinction between the HME chassis SilverFox® line and the HME fire apparatus lines."

HME's philosophy for the SilverFox and Ahrens-Fox fire apparatus lines was to provide quality custom fire apparatus that are safe, easy to maintain, durable, and cost-effective.

Apparatus have changed a lot since 1913. Lenz says, "The very first fire trucks in the 1920s were cab-overs and chain-driven with artillery wheels and solid tires. The front windows looked like three-section bay windows on homes. No air brakes, multiple disk clutches with four-speed transmissions, and worm drives." Fast forward to 2013, and HME apparatus are constructed with corrosion-resistant, strong, durable 12-gauge stainless steel. Pump modules and other components incorporated on HME fire apparatus are also built to deliver reliable performance with minimal and easy maintenance. Advanced engineering and digital technologies have allowed HME to design its fire trucks down to the smallest nut, bolt, and screw. 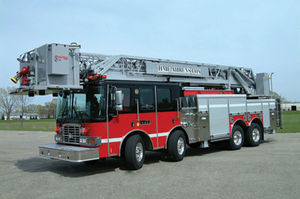 With the introduction of the Scorpion, HME also began to offer touch screen pump controls. The controls offer responsive valve and pump control and allow the controls to be located in a position that protects operators from being knocked off the platform

"Although the automotive industry is a direct influence on most of the standards in today's chassis innovations, the evolution of the majority of the design changes in our industry generally comes from the firefighters that are on the lines every day risking their lives to protect our property and lives," says Lenz. "However, there are other influences, such as the NFPA and emissions mandates, that affect design changes as well. Although every manufacturer that builds its own chassis has its own designs and has its own promotional methods, this is what drives the advanced electronics, better handling, suspension enhancements, roll-over protection, and compressed air foam systems that we offer today."

HME has always been involved with the engineering enhancements for building a chassis through its early experience designing suspension systems and the first tilt cab. That hasn't changed.

For instance, the company continues to engineer more maneuverable and safer steering systems. Its first step toward enhancing steering capability was the introduction of its short front overhang SFO® chassis. It was originally designed for wildfire and interface applications where handling, stability, and maneuverability are high priorities. Today, HME fire apparatus offer a turning radius of 52 degrees. Engineers also enhanced the steering systems with dual steering-gear designs.

With the introduction of the Scorpion, HME also began to offer touch screen pump controls. The controls offer responsive valve and pump control and allow the controls to be located in a position that protects operators from being knocked off the platform by charged lines. The pump and valves are networked using nonproprietary SAEJ1939 controls.

According to Lenz, HME has always maintained a balance of engineering and manufacturing staff and has tried to promote from within to encourage dedication and devotion to the fire service but also to the company. "It's always about the people in whatever your company does," he says. "Striving to take care of your employees generally resolves the perils of most of the challenges you face in any era as well as economies. In addition, we have had some very loyal dealerships that have stood by us over the past decade and continue to support our goals."

Speaking of people, Lenz has added more this year on the sales side. A new "Factory Direct Zone" for Indiana, Illinois, and Ohio will be led by Garry Hickman, recently hired as sales manager. Mitchell Willoughby, a 30-year veteran of the industry, has joined the HME team as national sales/marketing director. Since he joined HME, the company has nearly doubled its distribution network, providing additional sales as well as establishing service centers.

But, there is more to come. "Having had the pleasure of dedicating the last 36 years of my life to HME, I have certainly seen the lows and highs of not only our company but most of the companies in our industry," asserts Lenz. "With so many of today's mergers, acquisitions, and shutdowns, it makes us very proud to not only have the ability to withstand the test of time but also to assist so many other manufacturers within our industry to do the same. The future of HME, Inc. looks extremely bright indeed, with lots of possibilities ahead-big possibilities."

1933: Contract with International Harvester of Chicago to provide tandem suspensions

1950: Designed first tilt-cab over, tilting to the rear

1983: Designed the first tilt cab for a fire apparatus

1991: HME opened the chassis market to all other fire apparatus manufacturers

2002: HME began manufacturing and marketing its own fire apparatus